You Need to Be Dangerous to Attract Her!

You need to be dangerous to attract her!

I know you’ve been socialized to believe that a woman wants an empathetic, sensitive nice guy who endlessly caters to her; a harmless man who makes her feel safe.

Nothing could be further from the truth. Nothing!

It is hands-down the single-most harmful lie told about sex and attraction.

But you believe this lie and turn yourself inside out to become the ‘nice guy’ who gives her everything her heart desires.

And then you’re all surprised after you get married (sometimes before) when she loses interest and sex goes out the window.

But it was inevitable. Because in truth, her little heart does not desire a nice guy.

In fact, her brain is wired to be repelled by nice guys.

Don’t believe me? Look back over your past relationships and connect the dots.

The minute you compromised and started supplicating to her is the minute attraction started waning!

What her heart (and her body) truly desire is the guy who is capable of being intensely dangerous but who chooses not to be until it becomes necessary.

“A harmless man is not a good man. A good man is a very very dangerous man, who has that under voluntary control …

Women don’t even like harmless men! They hate them! …

What women want are dangerous men who are civilized … “

You must be a dangerous man.

But what does this mean, exactly? What constitutes a dangerous man?

Turns out that women are most attracted to men who are capable of intimidating other men.

Women are Most Attracted to Men Who Can Intimidate Other Men

Men establish the hierarchy; women pick from the top.

I know this is kind of a weird premise. And my guess is that your knee-jerk reaction is mostly negative. Especially if you’re struggling with nice-guy tendencies.

But give it a minute to sink in and I think you’ll find it resonates.

Men compete with other men to establish a social hierarchy. The men who come out on top of the hierarchy are the most desirable to women, and then women compete for the highest value man they can attract.

Or as one man put it somewhat crudely …

“Women don’t care about the struggle; they hang out at the finish line and f*ck the winners.”

It’s crass, but there’s some truth to it. Women are most attracted to masculine, physically intimidating men who are at the top of the social hierarchy.

True Conversation with my Teenaged Daughter

Me: Why are women attracted to bad boys?

Her: Because there’s something exciting about guys who do dangerous things.

Me: But, why? Why is that exciting?

Her: Because it’s the opposite of what women do.

She instinctively gets that it’s the dichotomy between the masculine and feminine that determines female preferences and sexual attraction.

Once you get past all your social conditioning, you can see there’s a beautiful simplicity to the system.

It’s the yin-yang of the sexual world. Two opposite … and complementary … elements that blend together in harmony.

The people who most dislike the system are the women who choose not to exert effort to be feminine … and the men who want to stay in their nice-guy comfort zone (or don’t even know they’re in it).

The good news for you, though, is that once you’re aware of how the system actually operates, you can act on it and build strong attraction in your marriage (more on that later).

It’s his physical formidability, not his beauty, that predicts how attractive he is to women. (Good news for homely men; not so much for nice guys.)

And … the more beautiful and feminine the woman, the more masculine man she prefers.

Women strongly prefer men with masculine features and social dominance. The more attractive and feminine the woman, the more she prefers masculine men.

The higher her vocal pitch, the more she prefers lower, masculinized vocal pitches in men.

Why You Need to Be Dangerous to Attract Her

Why are women like that, though? It seems so harsh and primitive for a woman to only want a man who is capable of intimidating other men.

But think about it from an evolutionary biology standpoint.

There are costs to sexual dimorphism. And one cost in our species is that women can’t physically defend themselves against male aggression.

1. You’re a woman and you’re physically smaller and weaker than at least 50% of the population …

2. You become even more physically vulnerable when you’re pregnant and nursing an infant …

3. Every evolutionary instinct you have gears you to protect your offspring’s survival at all costs …

4. You are not physically capable of protecting and providing for your offspring on your own …

Why She’s Geared to be Attracted to Dangerous Men

You Need to Be Dangerous to Attract Her – a  Rational Strategy

What would be the most rational strategy when faced with this set of data?

Isn’t it logical that as a woman, you are going to look for the strongest, most intimidating man you can attract?

The man who is going to protect and provide for you and your offspring when you’re not physically able to do so?

A man who has enough self-control to harness his aggression so as to not harm you or your offspring. But who is absolutely capable of physically intimidating any external threats.

Not a Conscious Strategy

Now, don’t get me wrong. Women aren’t consciously thinking this through. This is all operating in the background. And if you asked them, they’d probably even deny it because it’s such an uncomfortable truth.

They don’t consciously think … ‘this guy can beat up that guy, I want him’.

No, it’s just a case of her being strangely attracted to the most powerful and intimidating man in the room. Even if he’s not all that good-looking.

Funny how that works.

The Man You Most Admire is the Man She Most Desires

So, when you’re feeling super resentful of how her attraction works, wanting her to be attracted to all your nice guy efforts, and you’re angry that she’s not interested, here’s what you need to ponder.

That man you most admire … and the one you’d least want to go up against … think of the Daniel Craigs of the movie world … intelligent, brave, resourceful, talented, strong, ruthless, intimidating …

That is also the man she most desires.

She basically shadows your admiration.

Men & Women Both ‘Attracted’ to the Same Kind of Man 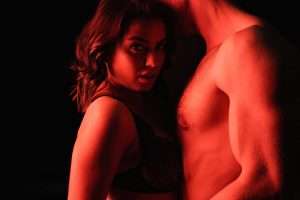 Women are attracted to guys who can protect & provide.

Deeper male voices were rated as more dominant by men and more attractive by women.

In one study, men and women watched videos of 157 different men.

The men were asked, “How likely is it that this man would win a physical fight with another man?”

Those men whom other men rated as being the most intimidating were also the men who were the most successful at attracting women.

Okay, so how do you apply all this theory into real-world application?

But it’s not that difficult; you just need your starting point.

Here are your first 5 steps.

1. Work out at a gym with other guys. Hire a trainer for a session or two.

2. Read No More Mr. Nice Guy (don’t share it with your wife, contrary to the author’s advice!)

4. Enforce boundaries with your kids. (John Rosemond is a great parenting resource.)

5. Check your testosterone levels. (Adequate testosterone is crucial to masculinity, and it’s easy enough to check at Discounted Labs.)

*I have no affiliation with any of these resources and don’t receive any financial benefit from recommending them. They’re all just excellent resources.

Work with Her Evolutionary Biology

It’s completely within your control.

Work with her biology, not against it.

She wants to be attracted to you. Give her the raw material she needs.

Be More Attractive to Your Wife – Size Matters!

The Real Reason She’s Not Attracted