Where to Touch Her – 8 Key Spots to Seduce & Arouse

Where to touch her to seduce and arouse?  Do you still touch your wife in sensual, non-sexual ways? It’s one of the fastest routes to seduction, and one of the first things to disappear in a long-term marriage. Sensual touch is the most effective way to arouse and seduce your woman. If you want more powerful sex, it’s time to bring it back.

What strikes me most is that once a couple has been married for a while, they feel like they no longer need to seduce each other. It’s the first step on the long road to a dead bedroom. Somehow, sex becomes quite business-like. Time is short and so is energy. Dinner, baths, kids to bed, initiate at the speed of light, sleep. That slow, deep touching just because you enjoy the feel of her goes away.

The Art of Seduction

But seduction can’t be rushed. So much more effective to take your time with it. And the best way is with touch – also known as physical escalation. Physical escalation is deceptively simple because it feels innocuous and non-threatening but is also sexually arousing. In addition, physical touch establishes a powerful emotional connection because of oxytocin release. The trick is to start with less sexual areas and gradually escalate to more obviously sexual zones, based on her response. A man tends to touch a woman the way he’d like to be touched. Firmly and straight to the point. But that method doesn’t work as well with a woman, and usually leaves her flinching slightly. She has a ton of less obvious erogenous zones that prepare her body for when you do get to the hard-core touching. Those zones are your starting point.

Remember the Rule of 3

There’s a 3-part art of seductive touch you may remember from when you were dating. First, you initiate casual touch on a mostly non-sexual (but still erogenous) area of her body. 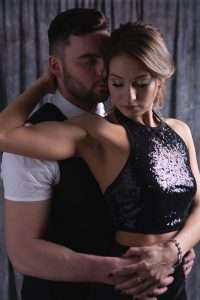 Use casual touch on non-sexual areas of her body

Second, analyze her reactions. Does she move toward or away from your touch. If she squirms or seems uncomfortable, it doesn’t necessarily mean she’s not interested, it may just be that you’re moving too fast for her. Simply take it down a notch. Third, once she’s comfortable with more casual touch, it’s time to escalate.

Most important is to keep your touch short and casual. A second or two is enough at first. You can gradually lengthen the touch as she becomes more responsive. You want to tease her a bit, causing her to anticipate your next touch.

Make a Date for It

Remember to keep your touch very light. Many men are heavy-handed, which negates the sensuality of their touch. Use just one or two of your fingers at a time, and just the tips of the fingers.

Where to Touch Her First

This likely sounds pretty mundane but stroking the palms of a woman’s hands is incredibly sensual. And eating/drinking together provides plenty of opportunities. Run one of your fingers over hers as she holds her wine glass. Or casually take her hand in yours and run a finger over her palm. Do it incidentally as if you’re not even aware of what you’re doing.

Glide your finger tip up her outer arms. Still light and brief. Back off almost immediately. You’re just priming the pump.

This one is usually overlooked, but make sure to touch her hair. Tuck it behind her ear or run a few fingers through it close to the scalp. When a woman is attracted to a man, you’ll see her play with her hair. Do it for her.

4.  Right Behind her Ears

You can segue straight from touching her hair to touching the skin immediately behind her ears. Remember … lightly. Just a fingertip. That skin is thin and exquisitely sensitive. This is an erogenous zone for a woman, but still discreet enough as to not be overtly sexual when you do it in public.

5.  On her Back Below Shoulder Blades

Touch to the back can produce sexual feelings at the same time as providing comfort. Keep it lower than her shoulder blades to avoid a platonic feel.

6.  Sweep Down to the Lower Back & Waist

From there, move your hand further down her back, and then gradually rest a hand on her waist. Again, lightly. This is all very casual. Touching her waist is quite bold but at the same time, it’s protective. And we know that women prefer men who are physically bold and aggressive.

As she responds to you, gradually escalate. Next stop is the nape of her neck. The nape of the neck is not only physically responsive, her baring the nape of her neck also indicates a willingness to acquiesce. Watch closely to see if she moves her hair to bare her neck, or touches her own neck. Both indicate interest. (Incidentally, lightly biting her nape during foreplay or sex is hugely arousing to most women because of dominance implications.)

Once you see she’s responding well to your touch, move to lightly tracing the very top of her cleavage. This is an intense move, so make it super casual and brief. And then back away to her arm, or shoulder again.

Get your wife a drink but refrain from drinking much yourself. You need to be analytical and gauge her reactions to all this. It’s easy to overshoot when you have the false courage of alcohol running in your system.

Make it a Habit 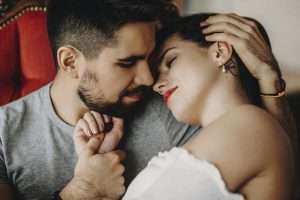 Will all this seem awkward at first? Sure, most likely. But your goal is to practice until touch becomes second nature to you and feels as natural as breathing,

A quick caveat. When attraction is high, you can do no wrong; when attraction is low, nothing feels right. If attraction in your marriage is quite low at this point, much of this isn’t going to work for you. Go back to the basics of building attraction and revisit this article again.

Remember to keep this sensual vs. sexual. When you go straight to sexual touch, a woman’s defenses immediately go up. (Sexual touch can also feel physically uncomfortable until a woman becomes aroused.) The beauty of sensual touch is it’s so subtle. Her body responds without her even having to think about it. Once her body is engaged, her brain often follows. So there you have it. Go forth and touch!

Top 10 Signs that Your Wife is Attracted

Vaginal vs. Clitoral Orgasms – Which are Better?