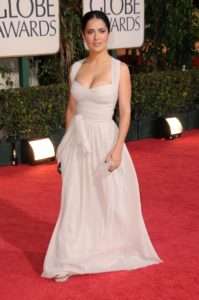 Take a look at this picture. But then again, I didn’t even have to ask, did I? You did it without even thinking.

Your eyes focused on Salma Hayek, and automatically went to her breasts, her legs and her hips without realizing what you were doing. Your pupils dilated, your heartbeat accelerated and your testosterone surged. What’s more, in about a fifth of a second, your brain decided that she’s hot.

You didn’t consciously think that she has an hourglass figure and so is probably fertile, that her stomach is flat so she’s probably not pregnant with another man’s child, that she has clear skin and shiny hair, so she’s probably healthy. All of this takes place just under the surface. If you’re a healthy, hetero male, all of this occurs without conscious thought or volition because that’s how your brain is wired.

Looking at attractive females actually triggers the reward circuitry in your brain.

Now, I want to put a different image in your mind. Conjure up a picture of a fat, angry woman with a butch haircut. Let’s call her Rosie ……….

Different story, right? If you were looking at a series of pics on a computer screen and came across this picture, you would actually expend effort to make her image disappear faster. Unattractive females trigger an aversion response in your brain.

So, that makes you pretty shallow and superficial, right? After all, she’s probably a lovely person on the inside. Why can’t you just be attracted to who she is?

Well …. because you can’t. You’re not wired that way. And no amount of effort is going to change that. Attraction isn’t a choice.

Okay, none of this is exactly brain surgery. So what’s my point?

A Lot of You Are Mad

Here’s the deal. I work with a lot of guys who are struggling to add leadership and dominance in an effort to attract their wives. And a lot of you are really really angry that you have to make all these changes in order for your wife to want sex with you. Comments that I hear fairly often ….

“It pisses me off that I have to jump through hoops just to have sex with my own wife.”

“Why do I have to be someone I’m not in order for her to be attracted? Why can’t she just love me for who I am?”

“Why does she have to play these games? Why can’t she just want sex?”

Well …. because she can’t. She’s not wired that way. Attraction isn’t a choice. Women are attracted to male leadership and dominance in the same way that men are attracted to Salma Hayek. Dominant behaviors trigger reward circuitry in a woman’s brain, and give a tremendous dopamine hit.

What happens when you first start trying to lead your family is that you constantly boomerang between the old you and the new you. One minute, you’re this strong, confident manly kind of man, but just as attraction starts growing …. BAM … the old supplicating, indecisive you rears his ugly head. This is completely normal. These behaviors are all new to you and it’s going to be a struggle to be consistent as you learn.

However, the problem is that for your wife, all of the back-and-forthing gives her whiplash. Just as she starts feeling a bit of tingly attraction, you suddenly revert back to old, passive you. Picture having sex with your wife. She’s her normal, sexy self. You bend down to kiss her neck and when you straighten up again, Sexy Wife is gone and there’s Rosie !!!

Argh. What happened? And it happens over and over again. You close your eyes to your pretty wife, and open them again to Rosie. It’s enough to give you nightmares, right?

This is what it’s like for your wife when you endlessly morph between the old you and the new you. It’s really a struggle to keep the positive momentum going while all these changes are taking place..

Mostly, it’s just trial and error. You need to keep working on it and have patience with both of you. As you get more consistent in your behavior, your wife’s attraction will continue to grow. I see this over and over again in coaching. The guys who have a firm understanding of what behaviors drive female attraction and are the most consistent with the new leadership behaviors make much quicker progress than the guys who boomerang back and forth. It can be especially difficult for a guy who’s been low T for a while and is just making his way back. In those situations, especially, it’s a matter of consistently practicing the new behaviors.

Above all, the most important thing is to understand what’s going on and accept that it’s a process. Give yourself and your wife room to make mistakes. The mistakes are what help you learn. Just keep practicing and you’ll get there. 🙂