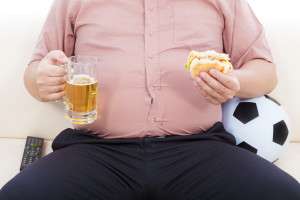 This is something I hear a lot.

What is normal when it comes to testosterone levels? The reference range most labs use is 348-1197 ng/dL. What your doctor doesn’t tell you, and quite possibly doesn’t understand himself, is that those so-called ‘normal’ levels don’t take into account age or fitness level. So, your level may be normal … for an 80 year old man in bad shape.

Yeah, that makes a lot of sense, doesn’t it?

What it means is that a lot of guys go home from their doctor’s office feeling like they must be hypochondriacs. “My doctor says my testosterone level is fine, but I still feel like crap. It must be all in my head.”

My own husband went through this with several doctors. We wasted a couple of years of our lives going to doctors who didn’t have the training they needed to deal with my husband’s low testosterone. Our marriage was on the rocks because of my husband’s medical issue and what we really needed was for someone to say, “Hey, I’m not sure what’s going on with you, but let’s find you someone who can help.”

I’ve seen a lot of guys suffer due to the same issue.

Here’s what you need to know.

‘Normal’ doesn’t mean optimal, but unless your doctor has specialized training in hormones, he may not know that. Here’s a chart that breaks T levels down for you by age.

What you need to remember is that ‘normal’ and ‘optimal’ are not the same thing. And if your doctor tells you that “you’re normal, you’re just getting older, there’s nothing to be done,” then you need to walk away and find a more experienced doctor. Would you stick with an eye doctor who told you not to worry about the fact that you’re having a hard time reading small print, that it’s normal to not be able to see well enough to read as you get older, it happens to all of us?

“I’m sorry, Mr. Smith. Your eyesight is getting worse because you’re getting older. Just go out and buy yourself a magnifying glass so you can keep reading. Or better yet, I’ve got these stretches that will make your arms longer so you can hold the book out further.”

Of course not. That’s ridiculous.

Just as it’s normal to lose your reading vision as you get older, it’s also normal for your T levels to decrease with age. What’s not normal is to pretend that it’s not a problem, to refrain from correcting it if possible. Both conditions are treatable and need to be addressed in order to retain your quality of life.

So … your doctor just told you your T levels are ‘normal’ and won’t treat you because it’s ‘not safe’. Now what?