Yes, But What if We Really *Are* Turning the Freakin’ Frogs Gay?

You know, I’m not really a conspiracy theorist. I don’t think George Bush caused 9/11, I think we really did walk on the moon, and I don’t think chem trails are turning the freakin’ frogs … well, hold on a sec …

Men today actually have less testosterone than they used to. T levels are declining by roughly 1.2 percent each year. Doesn’t sound all that significant until you run the numbers and realize T levels declined by about 17 percent from 1987 to 2004, even after adjusting for lifestyle factors like age, obesity, and smoking. A rapid change over a short time period.

…testosterone concentrations dropped about 1.2% per year, or about 17% overall, from 1987 to 2004. The downward trend was seen in both the population and in individuals over time.”

What that means is a greater proportion of men in 2004 have below-normal testosterone levels than in 1987. The entire population is shifting downward. So, if you’re a 46-year old man, your T levels (along with your sperm counts) are lower than your dad’s were at the same age, and significantly lower than your granddad’s. This probably doesn’t come as a huge surprise to most of us, right? We see it play out every day.

Why does it matter if your T levels go down?

Low Testosterone Turns You into a Girlie-Man

It matters for a couple of reasons. One reason … and probably the most important to you personally … is that testosterone is the hormone responsible for manliness. I’m just going to say this bluntly, when a guy’s T levels decline, he starts acting kind of like … a girlie man. He’s less muscular, he’s less assertive, and he’s less powerful. As one doctor put it, “Without adequate testosterone, men become infertile, impotent, docile and weak.”

In fact, men with low testosterone are more likely to:

Which is why these four apparently healthy, young BuzzFeed reporters whose T levels are ‘dangerously low’  should be concerned.

We’re in the Dark Ages of Men’s Health

The thing that bugs me most about the whole thing is that no one seems to notice. You talk to your doctor about T levels, and he looks at you like you’re a flake. He tests you if you push hard enough, and lets you know you’re ‘normal’, even when it’s clear your levels aren’t optimal. Walks you out of the office with a condescending pat on the shoulder. I’ve seen too many men walk away demoralized and feeling like hypochondriacs after talking to their doctor about T levels.

Instead of giving you an antidepressant, why aren’t we checking testosterone levels first? Dark Ages, I tell you.

It’s ironic that your doctor will readily prescribe you a statin that saps T levels, and yet balks at prescribing testosterone, a hormone produced by your own body. In fact, statins are one of the most widely-prescribed meds of all time, while the government has declared testosterone a Schedule III controlled substance. I guess you’re allowed to lower your T levels at will; you’re just not allowed to raise them back up.

Concerns about low testosterone are legitimate, not just male vanity and a desire to stay forever young.

We’ve now done enough studies about testosterone and how it impacts a man’s well-being to move out of the Dark Ages, and accept that testosterone is a real thing, not just male vanity and a desire to stay forever young. The words, “You’re just getting older,” need to die a fiery death.

What does ‘normal’ mean, exactly, when it comes to testosterone? Labs develop reference ranges based on what’s normal for the individuals tested at that lab. If you fall within that reference range, you’re considered ‘normal’.

Stop and think about that for a minute. Let’s say I go to a Walmart in Mississippi and weigh all the female shoppers and come up with an average weight of 300 pounds. All that means is that it’s ‘normal’ to weigh 300 pounds at a Walmart in one of the fattest states in the union. Who cares? We all know it’s not healthy.

LabCorp, one of the largest labs in the world, recently changed its reference range for testosterone from 348-1197 ng/dL to 264-916 ng/dL … a downward shift of close to 100 points. At what point does it become ‘normal’ for T levels to be in the single digits, and normal for the majority of men to feel like they’re one of The Walking Dead?

Average testosterone levels vary depending on where in the world you live. Levels are significantly higher in less-developed countries. You can test your levels in the U.S. and be normal, and then travel to another country, and be considered low.  How does that make sense?

It’s Not about the Nail

I see all these articles pondering why men are less masculine. They talk a lot about feminists, and cultural programming, and liberal universities turning our guys into pansies. I get it. It makes for a more interesting article. 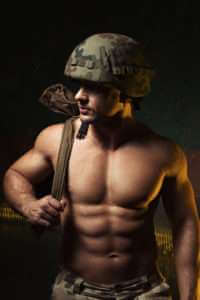 Maybe the Greatest Generation was so great because their testosterone levels weren’t in the toilet.

However, apply Occam’s Razor. It’s not a huge leap to realize that men are less manly because they have less of the hormone responsible for masculinity. Maybe the Greatest Generation was so great because their testosterone levels weren’t in the toilet. It’s not about politics, social programming, or a cultural shift. It really is about the nail. And the nail in this case is testosterone.

Why Your Testosterone Levels are Lower than Your Ancestors

This is an article of its own, but many experts feel that the most likely T-lowering suspects are endocrine-disrupting chemicals (EDC’s), found in plastics, cleaning supplies, and personal care products.

Steps You Can Take

So, what do you do? You live in an environment toxic to male health with a dearth of knowledge about how that affects you.

You’ve got to take control of your own health. No one has a more vested interest in your well-being than you do. Don’t blindly trust your doctor to know about testosterone. General practitioners treat everything from broken toes to common flu; they can’t be experts at everything.

Forbes magazine recently taunted, “You’re not the man your father was,” and there may be some truth to that, but it’s not set in stone. You don’t have to accept the status quo and live with the effects of low testosterone. You can turn it around without spending a ton of time or money. You simply have to take charge of your life and find the experts who know how to help.

You’ve got to take control of your own health. No one has a more vested interest in your well-being than you do.

This video always reminds me of the myopia regarding testosterone and its impact on male health.