One Simple Thing You Can Do Tonight to Awe Your Wife

If you’re married with kids, you know that keeping their clutter contained is like killing a Hydra. Chop off one head and three spring up to take its place.

The Clutter Dilemma can drive even the sanest parent wild with frustration. What you don’t know, though, is that it also provides you a great leadership moment.

Women are attracted to strong leadership. When you take charge of your kids and your household, your wife respects you more and grows more attracted.

Put those two facts together and what you have is … an opportunity to gain respect, provide leadership, and build attraction.

When it comes to taming household chaos, if you’re like a lot of guys, you probably do one of two things:

Both of those strategies are counter-productive when it comes to providing leadership.

What you have to do instead …

Motivate your kids to solve the problem themselves. This is true leadership. 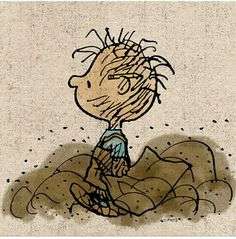 Your Mission … Controlling the Chaos

My husband and I have five kids … four big strapping boys and one tiny girl. And the clutter that trails behind them is incredible.

One night in particular I was frothing at the mouth from picking up one too many backpacks. There was much wailing and gnashing of teeth. But I knew the effects would last for only a short time before our Pig-Pens would be at it again.

Enter my genius husband with an incredibly effective solution.

He suggested to me that we take a very large trashcan and at the end of every night, any item left out by the kids became forfeit to what quickly became known as The Trash Can of Happiness.

I cannot describe to you the amazing wave of pure joy that filled my soul when my husband took on this problem. Happiness washed over me as I stopped mid-tirade, and an evil grin grew on my face. It was nothing short of orgasmic.

It was me and him against the world. We finally had ammunition for the terrorists that were our children. We immediately put his plan into effect. He commandeered a trashcan we usually use for Good Will items, and put this simple sign in place. 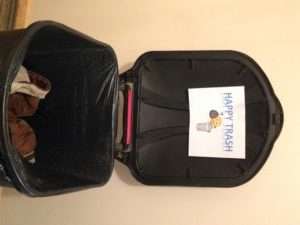 Leadership in a can

That jacket abandoned like so much detritus … heh … SCORE!

Boots covered in leaves and dirt and left by the entryway … BUH-BYE!

Now there was more weeping and gnashing of teeth … by our children. Heh! The shoe was on the other foot.

My husband and I sat back and basked in the glory of a moment of power and a tidy house. I admired his ingenuity and willingness to take a huge frustration off my shoulders. I felt … protected. Respect grew.