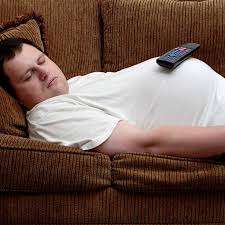 So, you’re wondering who snatched away your real husband and left behind this hollowed out shell. You wonder what’s going on. He always seems so tired. Has his job always worn him out this much? It seems like he wanders around in a fog much of the time, forgetting things frequently and not thinking as sharply as he used to. Has he always snored this much? You remember him snoring a bit sometimes when he was extra tired, but my gosh, his snoring could lift the roof nowadays. He seems down a lot, anxious and irritable.

He’s been trying to diet lately, but it seems like no matter what he eats, the pounds won’t come off and that belly just keeps getting bigger. You don’t ever remember it being that way before. And no matter how many times he promises himself he’s going to start working out, after a day or two, it always falls by the wayside. You wonder where that motivated, ambitious guy you married went. Is this just him getting older?

The sex …. when you have it …. is still pretty good and he still gets hard most of the time, but there have been a few times where the equipment wouldn’t cooperate no matter what you tried. And sometimes mid-way through, he’s huffing and puffing so much you’re afraid he’s going to have a heart attack. Sometimes he can’t last long enough and sometimes he can’t seem to finish, regardless of how hard he tries. Do all men experience this as they get older or is this something more?

You find yourself less and less attracted to him even though you still really like sex … and this makes you sad. You never expected to feel this way about the man you love. You still love him, of course, but those tingly feelings of attraction have disappeared. There’s no spark left between the two of you.

How do you know if all of this constitutes low T? Well, the answer is you really can’t be sure without a T test, but if your husband is experiencing a lot of the symptoms on the checklist below, it’s very possible that his testosterone has declined to sub-optimal levels.

If you’re reading this and nodding your head so vigorously that your laptop threatens to fall on the floor, it’s a good bet that your husband’s T levels are in the toilet. So why doesn’t he just fix them? It’s not brain surgery, right?

The thing is, zombies never realize they’re zombies. You can’t expect your husband to recognize what’s happening. The low T fog keeps him from being aware of the gradual changes that are occurring. It’s going to be up to you to lead him to reality.

How do you do this? It probably feels impossible right now. He is so resistant to getting his T tested that you feel like you’re stuck in a never-ending cycle. Every time you bring it up, he becomes more dug in. It’s not hopeless, though. We’re going to be exploring that in detail in future posts. Until then, hang in there. It’s going to get better.