‘I Was Hooked’: Bodybuilder Rich Piana’s Deadly Battle with Steroids 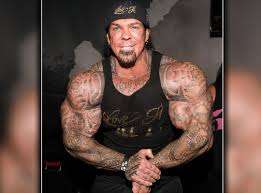 Dead at age 46, decades of abusing steroids made Rich Piana a god in the bodybuilding world.

But it ultimately killed him.

The difference is huge. Literally.

Muscles the size of Rich Piana’s aren’t natural. They simply don’t exist without using massive amounts of steroids. To get those muscles, a bodybuilder will raise his testosterone levels to what’s called supra-physiological levels … 2x, 3x, sometimes more than 10x normal levels.

That’s good, right? No, Bob, that’s bad. Supraphysiological testosterone levels may be great for muscles, but for your health … not so much. As so many bodybuilders discover.

So, what’s normal for testosterone? Well, the reference ranges say that anything between about 300 to 900ng/dL is ‘normal’. But normal isn’t optimal.

Reference Range for ‘Normal’ is Too Broad

For one thing, that’s a huge range. Obviously, the poor guy with T levels of 300 isn’t going to feel anywhere near as well as the guy whose levels are at 900. No matter whether you call it normal or not.

Those ranges also don’t take into account age. So yeah, your testosterone levels may be normal … for a 90-year old man!

Not Too Cold, Not Too Hot … Just Right

Well, you have to be in the mid-500’s for protection against cardiac problems. Higher levels are also associated with lower rates of diabetes and Alhzheimer’s Disease. Guys with lower testosterone levels are four times more likely to be depressed, and increasing those T levels tends to result in less depression.

If you haven’t felt like that in a long time, do yourself a favor, go check your testosterone levels. See if they’re optimal. Not merely normal. Optimal.

For more on the tragic death of Rich Piana.