How to (Finally) Get Him to Bring It In the Bedroom

Things in the bedroom are okay, but they’re just kind of … predictable. We start off fine … I’m trying to get into it, but then he subsides into that slow, sensual stroking stuff that seems to be all he wants to do, and the mood completely evaporates. Like mist in the sunlight … poof, it’s gone.

I keep asking for something a little more intense … you know … nothing crazy … just for him to maybe smack my booty once in a while, or give my ponytail a little tug, or push me against the wall and simply have his way with me.

He’ll try it for three seconds, but then … right back to slowly stroking me and asking me what I want. It drives me crazy! I just told him what I want, but it’s like he can’t hear me.

I can’t seem to convey the feeling I’m looking for. Excitement, intensity, maybe even a little bit of uncertainty as to what will happen next …

If you feel like you could have written those words, you’re not alone. This is one of the most common bedroom complaints women have.

My husband and I struggled with this for a long time until we hit upon a solution.

Politeness and predictability are great in the conference room … not so much in the bedroom.

You’ve gone way outside your comfort zone in trying to explain that you need more excitement … more intensity, more uncertainty … but it falls on deaf ears.

It’s not that he’s selfish in the bedroom; he wants to pleasure you, and has memorized every technique from She Comes First.

It’s relaxing … but not arousing. How do you explain to him that after the first five minutes of slow, sensual, oral sex, the only thing you’re focused on is trying to keep your mind off tomorrow’s To Do list?

Okay, don’t despair. It’s not that he’s incapable; his mind is simply wired differently than yours. This is a case of ‘show, don’t tell’.

Try this one simple trick … 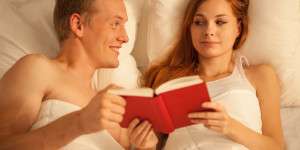 If you’re shy, it’s also easier for you to read about another person’s desires (even a fictional character’s), rather than your own.

Take your time with it. Don’t try to fit it all in one night; make it a habit a couple of times a week.

Read slowly and pause often so the two of you can discuss what you find arousing about each scene. Talk about how you can adapt it to real life. (After all, these books are fantasy. He’s not a duke, you’re not a shy virgin, and you don’t employ an army of footmen.) The outward trappings don’t matter, though; it’s the sense of energy and power that are exciting.

Be patient. Don’t expect him to get it all at once. You’ve developed your tastes over decades; this is all new to him. And don’t expect him to find it arousing. This is education, not entertainment. For now, it’s a new skill to be learned, and he’ll be focusing too much on the challenge to appreciate the eroticism.

The only important thing at the moment is communication. You want to be able to communicate your desires in a non-threatening, non-critical way. This is a great relationship tool for that.

I think you’ll find yourselves feeling closer and more connected, and that you’ll both start looking forward to your ‘reading’ nights.

And maybe do some ‘bodice-ripping’ of your own.

Try it and let me know how it goes.